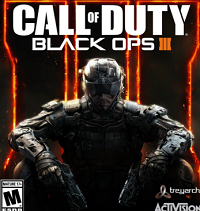 Best Buy via Amazon offers Call of Duty: Black Ops III for PlayStation 4 orXbox One for $39.99 with free shipping.