Amazon is offering Finding Nemo (Five-Disc Ulimate Collector’s Edition: Blu-ray 3D/Blu-ray/DVD + Digital Copy) for $34.99 and Free shipping. Plus you can clip the $8.00 off coupon and get it for only $26.99 shipped. 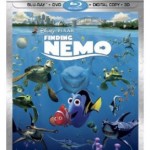 A delightful undersea world unfolds in Pixar’s animated adventure Finding Nemo. When his son Nemo is captured by a scuba-diver, a nervous-nellie clownfish named Marlin (voiced by Albert Brooks) sets off into the vast–and astonishingly detailed–ocean to find him. Along the way he hooks up with a scatterbrained blue tang fish named Dory (Ellen DeGeneres), who’s both helpful and a hindrance, sometimes at the same time. Faced with sharks, deep-sea anglers, fields of poisonous jellyfish, sea turtles, pelicans, and much more, Marlin rises above his neuroses in this wonderfully funny and nonstop thrill ride–rarely does more than 10 minutes pass without a sequence destined to become a theme park attraction.