Amazon is offering the game Brave for Nintendo DS as low as $29.99. Plus you’ll receive a $20 promotional credit and free $8.00 movie admission to Brave when you purchase this game. 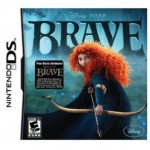