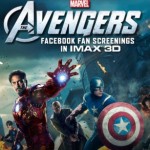 Los Angeles, New York, Chicago, Houston and Miami resident right now now. Assemble your home town friends and have them LIKE the official Avengers Facebook page for a chance to get a fan screening. Hurry now cause these won’t long.

The next five cities with the most LIKES on Facebook will be announced Monday 4.9 at 9am PST.