Amazon has the iGreat – Steve Jobs [Kindle Edition] for FREE – today only! 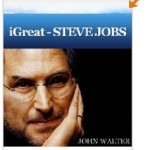 Steven Paul Jobs (February 24, 1955 – October 5, 2011) was an American businessman and inventor widely recognized as a charismatic pioneer of the personal computer revolution.He was co-founder, chairman, and chief executive officer of Apple Inc. Jobs also co-founded and served as chief executive of Pixar Animation Studios; he became a member of the board of directors of The Walt Disney Company in 2006, following the acquisition of Pixar by Disney.

Chase Continental OnePass Plus – Up to 40,000 Bonus Miles!

The Continental OnePass® Plus airline rewards MasterCard by Chase offers up to 40,000 bonus miles and perks such as fee waivers and free upgrades on flights. You’ll get 25,000 bonus miles after your first purchase and another 5,000 bonus miles for adding an authorized user, that’s enough for a free round-trip ticket. There is no annual fee for the first year, a savings of $95.