Amazon is offering Independence Day [Blu-ray] for $7.99 and Free Shipping for Prime Members or any $25 order. 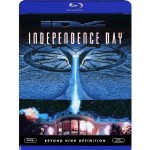 Will Smith, Bill Pullman and Jeff Goldblum are the stars of Independence Day in a grand, high-tech throwback to such films of the 1950s as War Of The Worlds as they deal with aliens, in numerous gargantuan spaceships, which arrive without warning and hover over the world’s most important cities, creating global panic. The nasty visitors use death rays to blow New York, Washington D.C, and Los Angeles to smithereens. A handful of plucky Americans, including the Clinton-esque President (Bill Pullman), a gung-ho fighter pilot (Will Smith) and a computer geek named David (Jeff Goldblum), attempt to devise a strategy against the invaders.On July 4th, their risky plan is put into effect, as dozens of fighter pilots (including the President) wage an assault on the spaceships.