Amazon is offering The Polar Express (Widescreen Edition) (2004) DVD only $6.82 + free shipping for Prime Membership or any $25 order. 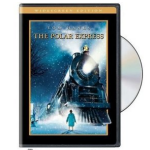 Destined to become a holiday perennial, The Polar Express also heralded a brave new world of all-digital filmmaking. Critics and audiences were divided between those who hailed it as an instant classic that captures the visual splendor and evocative innocence of Chris Van Allsburg’s popular children’s book, and those who felt that the innovative use of “performance capture”–to accurately translate live performances into all-digital characters–was an eerie and not-quite-lifelike distraction from the story’s epic-scale North Pole adventure. In any case it’s a benign, kind-hearted celebration of the yuletide spirit, especially for kids who have almost grown out of their need to believe in Santa Claus. Tom Hanks is the nominal “star” who performs five different computer-generated characters, but it’s the visuals that steal this show, as director Robert Zemeckis indulges his tireless pursuit of technological innovation. No matter how you respond to the many wonders on display, it’s clear that The Polar Express represents a significant milestone in the digital revolution of cinema. If it also fills you with the joy of Christmas (in spite of its Nuremberg-like rally of frantic elves), so much the better.

Probably the best card to earn frequent flyer miles, the Starwood Preferred Guest® Credit Card from American Express gives you 10,000 bonus Starpoints after first purchase. This can be converted to $100 gift card. Earn one Starpoint for every dollar you spend. No annual fee for the first year; $65 thereafter.