Amazon is offering The Oprah Winfrey Show: Reflections on an American Legacy [Hardcover] for only $2.45 and Free shipping for Prime Members or any $25 order. 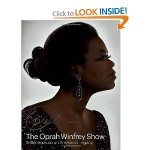 The Oprah Winfrey Show came to an end on May 25, 2011, after 25 years on television. Arguably the most influential television personality of all time, Ms. Winfrey and her show have had an impact on American culture that cannot be overstated. This beautifully illustrated book will explore and celebrate the legacy of the show using essays and tributes from a stellar group of contributors including Maya Angelou, Bono, Ellen DeGeneres, Nelson Mandela, Toni Morrison, Julia Roberts, Maria Shriver, Gloria Steinem, John Travolta, and more. The book will feature photographs from the Harpo archive, spanning the 25 years the show has been on the air, including the farewell season.
More